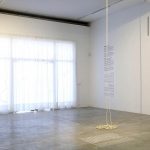 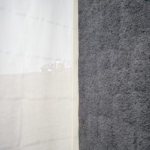 Caline Aoun, Water and Data, a contribution by Marfa’

For Frieze London Focus 2020, Marfa’ is proud to present a selection of works by Omar Fakhoury, Rania Stephan and Talar Aghbashian

Omar Fakhoury found some chairs abandoned in Beirut while wandering – an activity that doesn’t come by chance in his chaotic town. He captured them up through photographs before portraying on separate canvases; their last function would be to form a parallel community. Empty and worn out, like most of the public spaces in this town, these wrecks are remnants of a succession of specific situations. They are a substitute for the people of Beirut who are using them in front of shops, construction sites, and houses to withdraw their bodies for a rest, for waiting, for meeting.

The film and photographs of 64 Dusks formed part of Rania Stephan’s investigation of Soad Hosni’s life and death. A major star of Egyptian cinema who mysteriously fell from the balcony of the seventh story of Stuart Towers, London one evening in June 2001. Stephan returned repeatedly to the scene of her suicide in the summer of 2010 during a residency at the Serpentine Gallery, filming a circumambulation around the site. Regardless of her location in the city, the diptychs in 64 Dusks unfolds juxtapositions of sites/sights that she encountered, at the exact time of the day when Hosni committed suicide. The identically titled video, 64 Dusks, 2013, shows different footage taken from a moving vehicle of the same apartment block where the star leapt to her death. Hosni returns this gaze at one point as she is seen beaming while holding a camera in Who Else Could It Be, 2016; the found photograph remains a silent witness of a complex network of relationships that include Stephan and her Lebanese gallerist. Still Moving extends a 10-second shot of the face of Soad Hosni into an 11-minute sequence, foregrounding the granular texture and slowly flickering imperfections of the source–a VHS tape–against a face that preserves its beauty, even in agony.

At once familiar and alien, landscapes are at the core of Talar Aghbashian’s work. They seem to have been the theater of chaotic events left in a state of disturbing yet peaceful silence. An uncanny feeling is felt as one identifies with these anthropomorphic landscapes that speak of a fantasy place. In her paintings, flat parts of the landscapes or ‘cut-outs’ allude to kids’ pop-up books, reminiscent of Aghbashian’s childhood, and turn the two-dimensional surface into a skillfully layered one, populated by sculptural ruins. These images seem suspended in an in-between state, frozen after the occurrence of otherworldly phenomena, all the while propelling the viewer in a surrealist, sometimes futuristic dimension devoid of human life, as life itself has come to inhabit and animate the eerie landscapes. Time is not represented, it is perceived, as Aghbashian blurs all boundaries. She delves to understand the overlap and intersection of different narratives and explores the ambiguities of our times. As she builds up her paintings in layers and sands them back down, some remain transparent, others become dense, some blur, expand and shrink, get wiped, ever evolving and coexisting.

With works by Lamia Tamara Al Samerraei and Paola Yacoub

With works by Lamia Joreige and Paola Yacoub 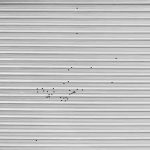